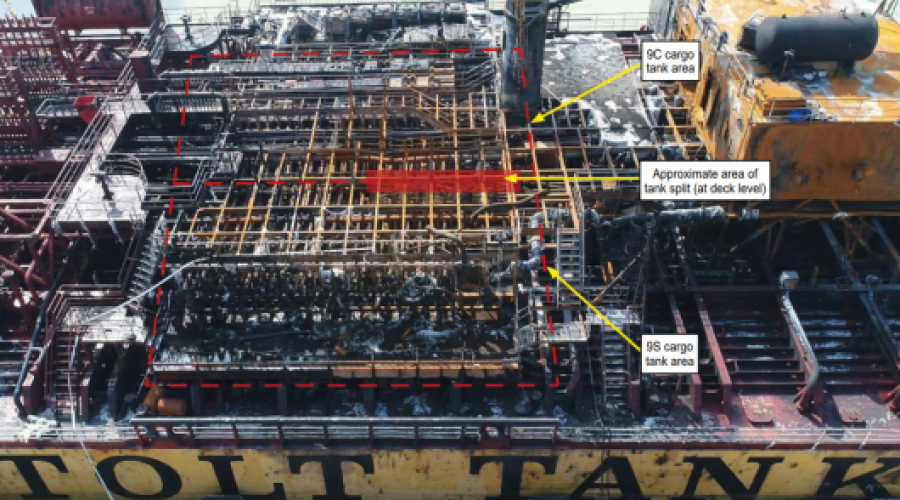 The explosions on board the chemical tanker Stolt Groenland last September were probably caused by the rupture of the deck above 9 starboard cargo tank, followed by the ignition of the styrene monomer vapour that was then released, according to the initial investigation findings by MAIB.

The blasts occurred while the ship was readying for a ship-to-ship cargo transfer with Singapore-flagged Product tanker Bow Dalian at the Yeompo Quay in Ulsan, South Korea.

According to the report, the vapour started to release from the pressure vacuum valve for Stolt Groenland’s number 9 starboard cargo tank, which contained styrene monomer.

Stolt Groenland had loaded 5,250 tonnes of styrene monomer at the LBC terminal in Houston, the U.S.A. in early August before it headed to Japan via the Panama Canal. The cargo was distributed between three stainless steel cargo tanks: numbers 9S, 6P and 6C.

As informed, prior to loading, the tanks had been washed and inspected and wall wash tests had been conducted; no problems were recorded. The tanks were not purged with nitrogen before loading and none were adjacent to heated cargoes in accordance with cargo loading instructions.

The concentration of TBC inhibitor in the styrene monomer in the shore tank was 11.3ppm but this was increased by the addition of 3 US gallons of liquid TBC to each of the destination tanks before loading was commenced. The target concentration of the TBC was 17ppm.

According to the report findings, the certificate of inhibitor, issued by the cargo surveyor at the time of loading, stated that the TBC should remain effective for between 60 and 90 days. It also stated that the inhibitor was oxygen-dependent and that the ideal temperature for the styrene monomer was between 60ºF and 85ºF (15.5ºC – 29.4ºC). Stolt Groenland did not carry an additional inhibitor.

MAIB said that the rupture was due to over-pressurization and the likely sources of the ignition were static electricity, sparks or elevated steel deck plate temperatures resulting from the tank rupture.

“A large hole was found in way of the tank’s common bulkhead with number 9 centre (9C) cargo tank and its hatch cover had been blown of. No cargo operations or deck maintenance were in progress at the time. VDR data showed that the temperature of the styrene monomer had reached 100ºC at the time of the explosion. Such an elevated temperature indicates that the cargo was polymerizing,” the report reads.

As a result of the incident, the Ulsan Regional Office of Oceans and Fisheries has prohibited the transport and unloading of some hazardous cargoes, including styrene monomer, at several terminals under the Ulsan bridge.

To remind, at 1050 on September 28, two explosions were seen and heard in rapid succession in way of the tanker’s cargo manifold. The resulting fireball passed very close to a road bridge above the quay.

The fire on board Stolt Groenland was very intense and large plumes of thick black smoke were emitted. Stolt Groenland’s crew evacuated using the free-fall lifeboat at the stern while Bow Dalian’s crew were taken off by Korean Coastguard boats that had arrived at the scene.

The fire was fought from the shore and from the water and lasted until early the following morning. The damage in way of Stolt Groenland’s cargo manifold and accommodation block was extensive.

The blasts resulted in several injuries, including those sustained by  Stolt Groenland’s gangway watchkeeper, who was blown over the guardrails by the force of the explosion; a deck rating on board Bow Dalian; and, a number of shore workers, including firefighters and police during the emergency response.

What is more, a similar incident involving styrene monomer cargo has been reported last month.

“On 20 November 2019, the MAIB was informed of an incident on board the Cayman Islands-registered chemical/products tanker Stolt Focus in which the temperature of a styrene monomer cargo had steadily increased. Efforts to stabilize the temperature, including the injection of additional inhibitor, were unsuccessful. Following consultation with chemists ashore, the crew distributed the cargo between four cargo tanks and mixed it with seawater, which stabilized the styrene monomer,” MAIB said.

Further investigation is being undertaken into the incident involving Stolt Groenland, which will focus on the factors contributing to the initiation of the polymerization of the styrene monomer, cargo monitoring, and the emergency response.

In the interim, chemical tanker owners/operators are reminded to adhere to the carriage and storage instructions details on the safety data sheet, the certificate of inhibitor, and those provided by the charterer. They are also advised to witness the addition of inhibitor into each cargo tank and closely monitor cargo temperature for unexplained increases.

They should also ensure that their crews are familiar with the action to take in the event of the styrene monomer self-heating/polymerizing.