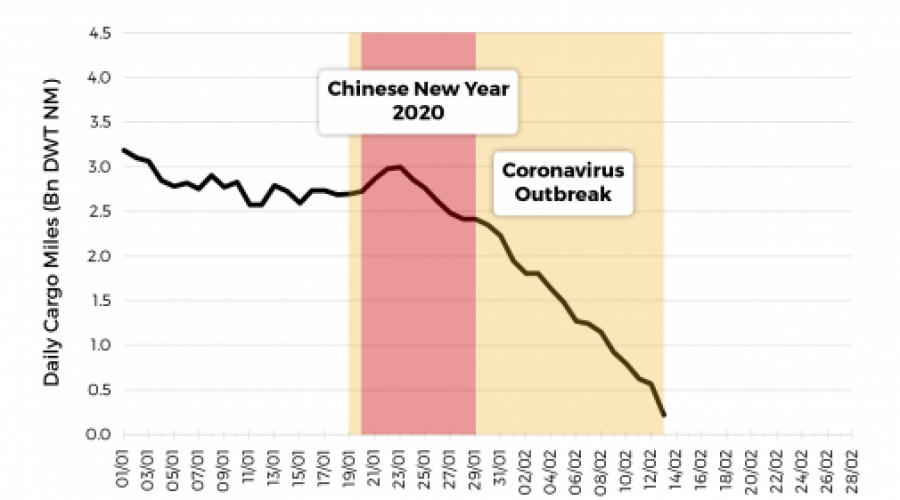 The daily cost of hiring a very large crude carrier (VLCC) for 12 months has fallen by over 20% in the last month predominantly impacted by the outbreak of coronavirus in China and the slashing of its demand for oil, data from VesselsValue shows.

Some 79% of China’s seaborne crude oil shipments arrive by VLCCs, while Suezmaxes and Aframaxes represent only 9% and 10% respectively, according to the data from Poten and Partners.

Spot earnings have fallen by over 70% during the same period, the valuation agency said.

The dwindling trend is evident on the VLCC route from the Middle East to China, marking a drop in demand from 3.42 billion ton-miles per day in 2019 to practically zero in February 2020.

“However, tankers are flexible and can be redeployed. As time progresses, we expect the market to “normalize” to some extent,” Poten said in its weekly overview on the tanker market.

“As rates have come down, relatively cheap VLCCs will encroach on Suezmax routes in the Atlantic Basin and they
may be used for floating storage, especially now that the oil markets have moved into contango. There have been various reports in recent weeks of traders and oil companies looking to use vessels for floating storage to take advantage of this contango play.”

The outbreak has also seen a major break in the sale and purchase of vessels, as well as delays of newbuilding deliveries and repairs, with the majority of Chinese shipbuilders invoking Force Majeure clauses.

Of the total orderbook of 389 tankers from MR’s up to VLCC that are under construction worldwide, 99 (25%) are being built in China, according to the data from Poten.

Many of the ships, especially the ones scheduled for delivery in 2020 are expected to be delayed as shipyards face shortages of labor and parts.

This also applies to the installation of scrubbers and ballast water treatment systems that owners had planned in Chinese yards, which are expected to be pushed.

“There are diverging views on whether we have seen the worst of the outbreak or whether it will take some time to get under control, but oil companies are already positioning themselves to quickly ramp up crude purchases to take advantage of lower oil prices. Recent oil prices rallies indicate that some refiners are already buying in anticipation of a recovery,” the report reads.

Wood Mackenzie estimates gas demand loss in China had reached 2 billion cubic metres (bcm) by the end of the first week in February, with more than half of this loss concentrated in the industrial sector.

With a resumption in economic activity, the consultancy group estimates a full-year gas demand reduction of between 6 bcm and 14 bcm in 2020, depending on the length of time required to contain the outbreak.

Year-on-year growth rates drop to 6% and 4%, respectively, mostly as a result of Q1 downgrade, as compared to pre-coronavirus outlook’s 8%.

The downside impact to Chinese LNG demand ranges between 2.6 million tonnes (Mt) ‘best case’ with recovery by April and 6.3 Mt in a more ‘prolonged case’ with a slower return to normal.

“The coronavirus outbreak and its impact on Chinese gas demand could not have come at a worse time for the already oversupplied global LNG market. Disappointing APAC demand growth contributed to the halving of LNG prices through 2019, and with further new volumes emerging from US producers, we were already anticipating lower prices through 2020,” WoodMac said.

“With too much LNG, and nowhere left to place it, it looks like a supply correction is needed to balance the market. We are expecting supply response in some markets like Egypt and potentially in Eastern Australia, where the likes of Shell and APLNG could attempt to sell gas into the domestic Queensland gas market. However, it is US Gulf producers who have the highest marginal cost of supply and the most flexibility.”

The Chinese government said it would offer support for companies seeking to declare force majeure on international contracts. The first such reported notes were sent by CNOOC last week to LNG suppliers, and CNPC and Sinopec could follow suit.

Entering force majeure is rare in LNG markets and will be contractually complex, WoodMac explains.

Contract wording will need to explicitly include epidemics as force majeure events. Demand reduction on its own or a notice by a relevant Chinese government authority will likely be insufficient. In addition, prior to being released from their obligations to receive a cargo, buyers would need to follow contract procedures, proving that actions have been taken to minimize and overcome the impact of the force majeure event.

The consulting group believes that while major Chinese buyers may call for force majeure, suppliers may instead insist on trying to defer deliveries to later in the year once the demand impact of coronavirus has diminished.

“Given the wide spread between high contracted prices and low spot market prices expected to persist through 2020, there is a strong commercial incentive for each side to resist the actions of the other. If buyers do succeed in exercising force majeure, the revenue impact on sellers could be significant. The approximate price for many of these oil-indexed contracts is around 14.5% of oil range, equating to US$8.83 per million British thermal units (Mmbtu) (using US$54 per barrel of oil equivalent); this compares with spot prices of around US$3.15/MMBtu,” WoodMac estimates.