BIMCO: 47% of all dry bulkers delivered in 2020 fitted with scrubbers 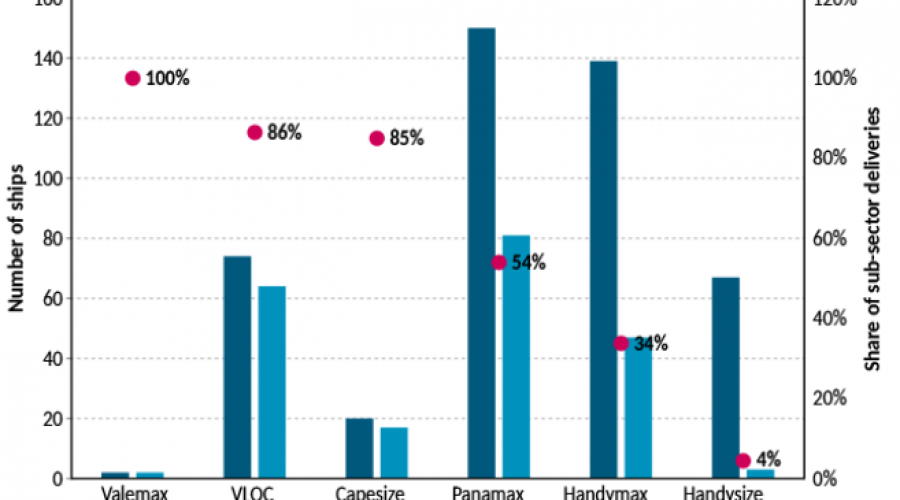 BIMCO: 47% of all dry bulkers delivered in 2020 fitted with scrubbers

Some 47% of all newly built dry bulkers delivered in 2020 are fitted with exhaust gas cleaning systems, known as scrubbers, data from BIMCO shows.

Interest in scrubbers peaked in 2018 and 2019 ahead of the implementation of the IMO 2020 sulphur cap that entered into force in January 2020.

Bulk carriers have claimed the biggest portion of the total number of installations, followed by containerships and tankers.

At any time since the start of 2019, yards have mostly been retrofitting dry bulkers and containerships, whereas crude oil tankers have seen the lion’s share of scrubber installations occur on board newbuildings.

According to DNV GL, some 4,047 ships with scrubbers were set to be in operation or on order by the end of 2020.

The IMO Global Integrated Shipping Information System (GISIS) data from March shows that a total of 2,045 scrubbers were installed and fully approved by the end of the first quarter of 2020.

While only three Handysize bulkers in total have been delivered from the newbuilding yards with a scrubber fitted in 2020, one in three Handymax bulkers were delivered with scrubbers installed, BIMCO said.

Most scrubber-fitted bulkers were delivered in the Panamax sub-sector, that saw 81 units out of 150, equal to a share of 54%, confirming the clear-cut tendency among the newbuilt deliveries that have been seen during the first 11 months of 2020.

When considering the share of scrubber-fitted ships within the large sub-sectors, comprising of capesize, Very Large Ore Carriers (VLOC) and Valemax, that share ranges between 85% and 100%, BIMCO said.

In just 13 cases out of the 96 ships that burn the most fuel, the shipowner opted for using Very Low Sulphur Fuel Oil (VLSFO), instead of making the scrubber investment.

Scrubber-fitted vessels have been earning premiums for owners since the entrance into force of the IMO 2020 sulphur cap at the beginning of January 2020.

The price of the compliant fuels and their quality were among the main concerns of the shipping majors prior to the regulation’s entrance into force. As such, owners rushed to the yards to book their slot for a scrubber installation instead.

“Clearly, the marine bunker fuel price spread between low sulphur fuels and heavy sulphur fuels has been lower than initially expected. Currently, at $ 72 per MT in Singapore, the spread is a far cry from the pre-IMO 2020 average of $ 185 per MT seen between 1 August and 31 December 2019,” says Peter Sand, BIMCO’s Chief Shipping Analyst.

“It is still worthwhile to mention that 2020 year-to-date average spot market earnings for a scrubber-fitted capesize have exceeded that of a non-scrubber fitted capesize by $ 2,818 per day (+27%).”

To some extent, the fall in bunker prices has protected dry bulk earnings from performing even more poorly than they otherwise would have done this year due to the impact of COVID-19.

According to BIMCO, all forecasts now point to a slow recovery in 2021, which even a 20-year low in fleet growth will not be able to make up for, leaving dry bulk shipping to face another trying year.

The post BIMCO: 47% of all dry bulkers delivered in 2020 fitted with scrubbers appeared first on Offshore Energy.